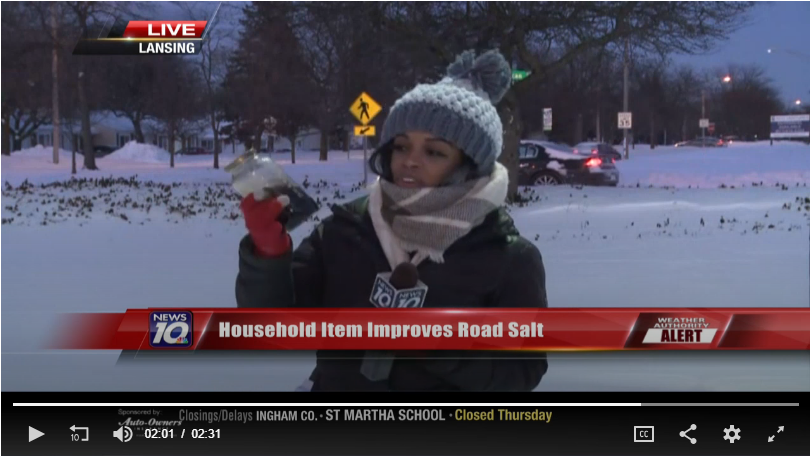 INGHAM COUNTY, Mich. (WILX)- Let's focus now on getting from A to B on those slick Mid-Michigan roads. You may have heard of chloride working with road salt to help the salt work better. However, there's a product you may have in your pantry, that can do the job too.
With temperatures that are below 15-20 degrees Fahrenheit, road departments don't even bother with just salt alone. Chloride Solutions, a Williamston-based company, is using beet juice mixed with chloride and salt to help make the roads safer for you.
"You still need salt in a product to melt snow and ice. The beet juice is helping the salt do that but it is lowering the toxic nature and the corrosive nature of salt," said David Barczak, Chloride Solutions Sales Engineer.
Chloride Solutions manufactures and distributes a product called Geo Melt-55. A beet-based product used with chloride and salt to make the roads safer.
The company said this product has a higher sugar content than most liquid de-ice.
"The sugar allows the freezing point to be lowered and stay at that point, even in the delusion of melting the ice and snow," said Barczak.
According to experts, salt, when used on the road, can create more ice because when the salt dilutes the ice it creates water and freezes again.
Chloride Solutions said their product does not do that and works in temps that are as low negative 30 degrees Fahrenheit.
"Because of it's higher concentration of sugar, it takes longer to dilute it," said Barczak.
They've even tried to get the Michigan Department of Transportation (MDOT) to buy in on their product.
"We have bided as an alternative. But whatever the powers be has never decided to give Geo Melt an opportunity. Outside of where the counties road commissions have asked for exceptions," said Barczak.
News 10 has asked the state if they have considered using Geo Melt 55. They told us they have a product that is both cost effective and effective on the roads, its called Boost. However, they have an agency within MDOT that regularly tests out new products.